The Best Skilled Labor Jobs by Employment Growth and Salary 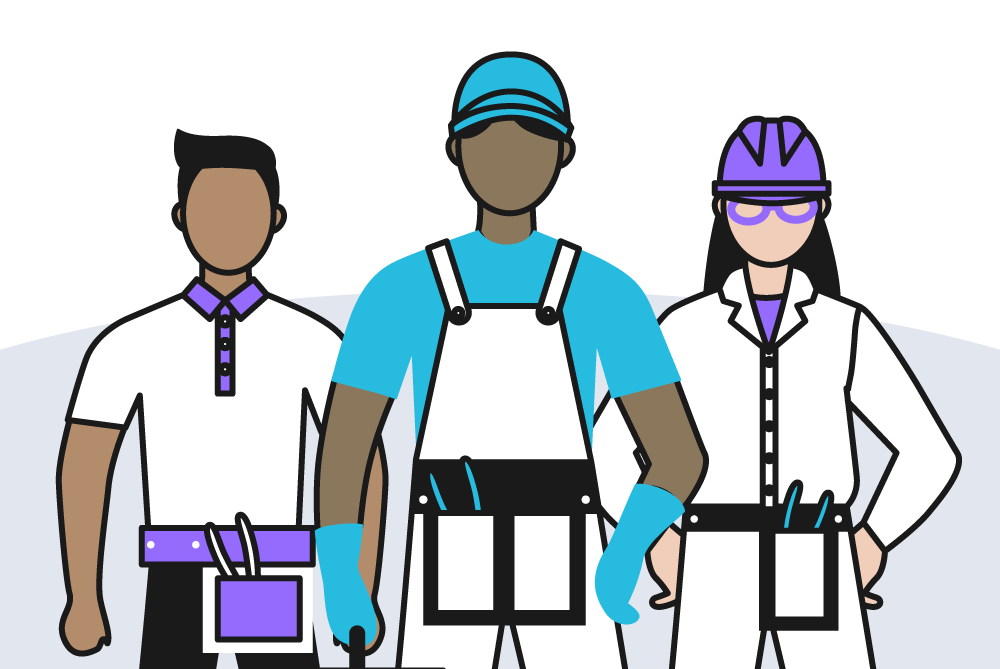 The United States is in the midst of a skilled labor shortage — the likes of which has never been seen before. The U.S. Bureau of Labor Statistics (BLS) reported there were 6.6 million open jobs as of July 31, 2020. Among the industries with the highest increase in job openings are skilled labor occupations, including the construction industry.

A recent National Association of Home Builders survey found that 77% of builders were experiencing a decreased willingness of workers and subcontractors to report to work due to the pandemic. There are concerns that when these laborers do return to work, they’ll opt for a field with better working conditions and benefits, such as grocery store retail, even if it means taking a pay cut.

This is only part of an ongoing trend away from skilled labor work, as students are being pushed to pursue four-year degrees, and leaving states due to the struggle to fill mid-skill-level jobs. The fact is that while the cost of college is skyrocketing, the salary premium degree-holders can expect to earn is barely increasing each year. With the cost of college so high and the job market in flux, could a skilled trade profession be the answer for many Americans?

To find out, we used data from the BLS to see which occupations were most in demand, how much they paid, the education requirements, and which states were best to work in.

Which Occupations Will Have the Fastest Growth Over the Next Decade?

To gauge the projected employment levels for the skilled labor industry, we looked at the BLS’s Employment Projections Program: a 10-year projection for employment by industry and occupation from 2019 to 2029. It uses historical and current economic data to determine where job growth is likely to occur, as well as which industries may see a decline in employment growth. We defined skilled labor occupations as those in the BLS categories of “Construction and Extraction” and “Installation, Maintenance, and Repair.” Overall, these skilled labor occupations are expected to grow by 3.4% from 2019 to 2029.

Job growth is only one element of a promising future career. To get a fuller picture of which occupations within the skilled labor industry will provide the best future opportunities, we compared projected job openings to the 2019 median annual wage. This showed us not only where future job openings lie, but also which occupations could provide the best career opportunities.

Based on these two metrics, electricians and plumbers offer good opportunities. Electricians have the fourth-highest wage of all skilled labor occupations in 2019 with a median annual wage of $56,200. This combined with the BLS’s projection of nearly 95,000 job openings between 2019 and 2029 makes for an attractive prospective career.

Plumbers, pipefitters, and steamfitters have similarly good prospects. These occupations earned the fifth-highest median annual wage in 2019 at $55,200 and are expected to have over 66,000 job openings in the next decade.

Projected job openings are a gauge of how easy it may be to enter a given field, but sometimes a higher salary is worth the higher competition when applying for jobs. To get a look at which jobs paid the highest, regardless of demand, we sorted all skilled labor occupations by their 2019 median annual wage.

“Elevator installers and repairers” and “electrical and electronics repairers” have the highest annual salaries at over $82,000 each. But even on the lower end, “Rail track laying and maintenance equipment operators” earned a median annual wage of over $56,000 in 2019 — well above the national average of approximately $40,000.

Given that the average annual price of getting a college degree (including tuition, fees, and lodging) was $30,500 in 2020, and the average cost of a four-year degree stands around $122,000, finding a career with a good salary but minimal education requirements can be a smart move. Plus, student loan debt is getting less and less appealing as wages aren’t rising at the same rate as the cost of attending university.

College degree earners make less than 50% more, on average, than workers with only a high school diploma, a number that has grown by less than 1% in the last year, and even declined between 2016 and 2018. Meanwhile, students borrowed over 116% more over the past decade, which means students are taking on more debt to go to college, but their salary premiums aren’t increasing to compensate for it, making skilled labor occupations all the more attractive.

States Where It Pays to Be in a Skilled Labor Occupation

Wages vary across states, which makes comparing earnings on a national scale less meaningful. The fact that the national annual wage for skilled laborers is $47,300 doesn’t make much difference to a laborer in Arkansas earning $38,000 per year. When choosing a field of occupation, it pays (pun intended) to think not just about what you do, but also where you’ll do it.

Looking at the annual median wage among skilled workers by state, we found the ten highest paying states and ten lowest paying states for skilled labor. Topping the list is Alaska, where skilled laborers earn a median of $61,900 per year, and Hawaii, where laborers earn $61,600 per year. Among other states, Illinois has the highest median skilled labor wages. Massachusetts, Connecticut, New Jersey, Washinigton, Minnesota, and New York are other good prospects, each with median annual wages over $54,000.

On the other side, the states with the lowest median annual wages for skilled labor occupations are Arkansas and Mississippi. Workers in these states can expect to earn around $20,000 less per year than those in the highest earning states.

That said, the cost of living cannot be ignored. While Alaska and Hawaii promise the highest median wages, these states are also among the least affordable to live. Arkansas, on the other hand, is ranked as the 12th most affordable state and Mississippi as the 15th. So your $38,000+ salary will go a lot further in these states. Florida, however, is probably not a skilled laborer’s best destination, as it pays the third lowest average annual wage while being the 15th least affordable state to live in.

The States Hiring the Most Skilled Laborers

Wyoming had the highest employment rate of any state at 85.5 employed skilled laborers per 1,000 population. So while it may fall in the middle of the pack in terms of annual wage at $52,400 a year, Wyoming can still be a promising state for skilled laborers.

The Bureau of Labor Statistics projects employment to grow by six million jobs between 2019 and 2029 with roughly 470,000 jobs coming from the skilled labor group. While the fastest growing sector in terms of employment is the health care sector, these jobs require significant higher education, and sometimes up to a doctorate degree. Meanwhile, skilled labor jobs can pay well above the national average, but require only a high school diploma and perhaps some trade school certifications.

Truth is, many parents and students simply are not aware of the numerous career and job opportunities that pay well without requiring a four-year degree. If there is one lesson to be taken from the global pandemic, however, it’s that we are in the midst of a new societal norm. This could be the perfect time to try something new by pursuing a career in the skilled labor industry.

When you’re ready for a new job or career change, Joblist is here to help. Our mission is to help you find a job that is tailored to you. By answering a few quick questions, we can help you create a curated list of job opportunities to meet your criteria. We’re passionate about matching the right people with the right jobs, regardless of educational attainment. Get your personalized job matches today at Joblist.com. We look forward to helping you find your dream career!

No statistical testing was performed. As such, the results on this page are for informational purposes only.

It’s important to go into any job search well-informed. We’d love for you to share the findings of this study with anyone who could benefit from its information, but ask that you do so only for noncommercial reuse. Also, please include a link back to this page so that readers can view our full results, and our contributors can get the credit they are due for their hard work in compiling these data.